Haritha Haridas
I am a Mohiniyattam and Bharatanatyam dancer, teacher and life-long student who has been learning both dance forms for the past 30 years. I am a disciple of Smt. Shyamala Surendran (Dharani School of Performing Arts, Kochi) and did my Masters in Fine Arts (MFA -Bharatanatyam) from SASTRA University under the tutelage of Dr. Padma Subramanyam. I am currently based in Singapore where I conduct dance classes, programs and productions under the banner of my school, the Medasvi School of Dance. Facebook: facebook.com/medasviharitha Blog: mohiniyattamdance.blogspot.com YouTube: youtube.com/harithaharidas84

The Heroines or the Nayikas in Indian classical dance are divided into 8 according to their emotions or states in relation to situation with their Hero or Nayaka. Hence the name Ashtanayika where Ashta means 8. The Natya Shastra describes the nayikas in the following order: Vasakasajja, Virahotkanthita, Svadhinabhartruka, Kalahantarita, Khandita, Vipralabdha, Proshitabhartruka and Abhisarika.

The Nayikas are also associated with the two types of the shringara rasa (the rasa related to love) - Sambhoga (love in meeting) and Vipralambha (love in separation). Vasakasajja, Svadhinabhartruka and Abhisarika are associated with Sambhoga while the others are linked to Vipralambha. In the Shringara Prakasha, Bhoja relates the various nayakas and nayikas with musical ragas and raginis (a female raga). Somanatha's Ragavibodha (c. 1609) and Damodara's Sangitadarpana (c. 1625) continue this trend. The Nayikas are:

2. Virahonkhanditha (One anguished by separation) – The Nayika is pining for her lover who has still not come back to her. She is completely distressed at the absence of her lover who is yet to return from his journey. She is demonstrative about her suffering and cannot bear to see happiness around her till her lover returns. Tears are her constant  companion.

3. Svadhinabhartruka (One who is proud of her lord) - This Nayika is loved very much by her lover. She enjoys everything around her. She loves to travel and have fun. She is generally satisfied about the way her life is going.

6.Vipralabdha (One who feels deceived by her lover) -The Nayika feels betrayed and hence is upset ,irritated, swooning, tearful and the like.

These are the 8 Nayikas in Indian Classical Dance. Earlier, it was said that the Kalahantharitha, Khanditha and Abhisarika Nayikas did not have a place in Mohiniyattam. This could be maybe because back then Malayali women were considered to be docile and not aggressive. But now Mohiniyattam dancers have started to explore  and choreograph items depicting all the 8 Nayikas. These feelings of these heroines are all associated with their respective heroes or Nayakas.

The Nayakas are divided into 4 according to their overall character or nature:
Posted by Haritha Haridas at 5:55 PM 1 comment: 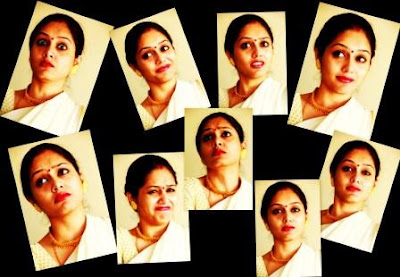 Rasa is the primary and most important element of dance i.e. the sentiment or the emotional flavour which arouses interest amongst the audience. When a combination of Sthayibhavas come together, Rasa is produced. Sthayibhava (I will explain this further in the posts to follow) is the permanent or established state of mind. The dancer utilizes the 4 elements of Abhinaya along with Sthayibhava and hence the spectator enjoys the performance.

Some say that the Rasas are derived from Sthayibhavas while some say otherwise. But like I mentioned earlier, Bhavas and Rasas are complementary. The terms are interchangeable according to the situation. The only point to note is that when one enjoys the Abhinaya it can be called Rasa , otherwise it is Sthayibhava.

Rasas are divided into nine and are hence called the NAVARASAS (Nava ~ 9).

It is said that Hasya, Karuna, Adbhutha and Bhayanaka are a result  of Sringara , Raudra, Veera and Bheebhatsa. Each of these Navarasas has its very own Presiding Deity, its own Sthayibhava, Sthayidrishti (steady glances), Rasadrishti (glances according to emotions), Colours, Ragam (melody) and Swaram (musical notes). All these details for each Navarasa have been encapsulated in the table below:-

Sanchari Bhavas
These are the transitory states of mind associated with the Rasas and are 33 in number.  Sanchari Bhavas will be explained in detail much later (I will be mentioning them in the explanation of the Navarasas given further below). Currently, I shall be basically sharing their meanings as seen just below:

Explanation of the Navarasas

SRINGARA
Sringara rasa can be interpreted as love (romantic/erotic), attractiveness or beauty. Most of the compositions of classical dance revolve around the relationship between a man and woman. The romantic relationship between two lovers is often taken as an allegory for the bond between the mortal and divine. Hence the foremost emotion produced is Sringara.  Sringara is referred to as “the Mother of All Rasas” in Indian classical dance. This is because Sringara has the possibility to give rise to a variety of emotions including envy, rage, empathy, fear and the expression of sensuality. The sub-rasas of Sringara are admiration, aesthetic sentiment and devotion.


Sringara does not necessarily have to be romantic love. It can also depict parental love which is called Vatsalya Sringara . The devotion of a mortal for the divine is called Bhakti Sringara. Sringara is classified into two types:
Sambhoga Sringara –  Sambhoga means union. It is the romantic love illustrated when two lovers meet. Here the Nayika describes the beauty of her surroundings and spends time in her garden, enjoying the company of her sweetheart. She adorns herself with clothes and exquisite jewellery, decorates her chamber etc.
·       Representation: Raising the eyebrows and neck slightly, looking coyly and lovingly with a sweet smile.
·         Upangas: Eyebrows,eyes, neck, chin, lips

HASYA
Hasya is the expression of joy or mirth. Humour is the most commonly used human expression. Satire and sarcasm are sub-rasas of Hasya. Hasya is light-heartedness, merriment, laughing, teasing one another, being amused, and being naughty.
Hasya is classified into 2 types basis the target of one's humour:

Hasya is also classified into 6 types basis the meaning & method behind the portrayal:

KARUNA
Karuna ideally means compassion and is the expression of sorrow.  The determinants of Karuna rasa are curse, distress, downfall, death of near or dear ones, misfortunes etc. It can also be due to misfortune happening to oneself or sorrow for others. Karuna’s fundamental feeling is sympathy.
The Sanchari Bhavas of Karunas are Nirvedha, Glani, Chintha, Outhsukya, Aavega,Bhrama, Moha, Thrasam, Aalasya & Marana. It is said that when a person’s emotions of happiness or anger reaches a certain threshold, then the feeling one goes through is sadness.
Representation: Puckering one’s forehead with the eyes looking up with a dejected look; lips pulled down with the head turning to one side slightly.

RAUDRA
The irascible emotion that arises in a person when he/she experiences anger, shame, sadness or defeat is Raudra.  Vengeful acts, perfoming deeds with cruel intentions or making others do them on one’s behalf are mainly the consequences of Raudra.  Reprimanding, ill-treatment, abusing, ridiculing, failure & killing - all give rise to Raudra. The Sanchari Bhavas associated with Raudra are Chapalatha, Ugrata, Garv, Romancha (horripilation), callousness, rage & excitement.


Representation: Raising the eyebrows, reddening and expanding one’s eyes, quivering the area around the eyes and glaring intensely, with the chin set and flared nostrils.
VEERA
Veera means courageous and noble. It is said that Veera is generally seen in the “Uttama” characters. Some of the characteristics associated to Veera are easy-going, hardworking, disciplined, strong, takes initiative, bold, heroism etc . The Sanchari bhavas associated with Veera are Drithi, Mati, Garv & Aavega.
Veera is classified into 3 types:

There are a few more that can be seen:
Representation: Having a confident look on the face, with the eyes slightly expanded, eyebrows slightly raised and a small smile on the face.

BHAYANAKA
When a person sees, hears or feels anything that instils fear or Bhaya - like seeing horrifying scenes, sensing death, being alone, and/or anticipating heavy loss, it gives rise to Bhayanaka Rasa or the expression of being frightened. It can also be a result of being caught for wrong-doing. When one feels fear, they may be stunned, their voices may change, faces become pale, they start to perspire and shiver. The Sanchari Bhavas associated with Bhayanaka are Shanka, Dainya, Avegha, Chapalatha, Jadya, Thrasa, Apasmara & Marana.


Representation: Slightly crinkle the forehead, expanding the eyes while looking around in fear and flared nostrils, pulling the lips down and shivering and with the shoulder raised a little bit.

BHEEBHATSA
When a person experiences or even thinks of something he/she detests or find themselves in an unpleasant situation whilst sensing something filthy, nasty, cruel, jealous, and/or compulsively dishonest - it gives rise to a feeling of repulsion or Bheebhatsa. The Sanchari Bhavas associated with Bheebhatsa are Apasmara, Avegha, Moha, Vyadhi & Marana.


Representation: Creasing one’s lips & eyebrows and puckering the eyes while tightening the shoulders.

ADBHUTA
When a person experiences or hears something they think is quite impossible, like seeing someone or something unexpected, hearing strange noises etc. gives rise to an expression of wonder. When one sees extreme gestures of charity, wealth, profound knowledge, beauty of a person or and object, it can also give rise to expressions of amazement and this sometimes results in highly eloquent and praiseworthy pieces in music and dance. It can either be pleasant or unpleasant. The person experiences horripilation, excitement, can sometimes faint with shock (while the face becomes pale), will be stunned, and can become speechless. The Sanchari Bhavas associated with Adbhuta are Avegha, Chapalya, and Dhrithi.


Representation: Raising eyebrows and cheeks, expanding eyes (eyeballs should stand out) and nostrils, while raising and bringing the neck slightly forward

SHANTA
When a person experiences a sense of tranquillity i.e. when one is free from desires  & fear, is the feeling of Shanta. Shanta is said to foster salvation i.e. Moksha. A calm state of mind can be achieved when one is patient, generous, service-minded, has a philosophical outlook of life, is pure at heart, has self-control, is peaceful and harmless by nature. The person may be still or may experience horripilation. The Sanchari Bhavas associated with Shanta are Nirveda, Dhrithi, and Smrithi.

Representation:  Basically having no expression on the face.

Promote Your Page Too

Get in touch with me. 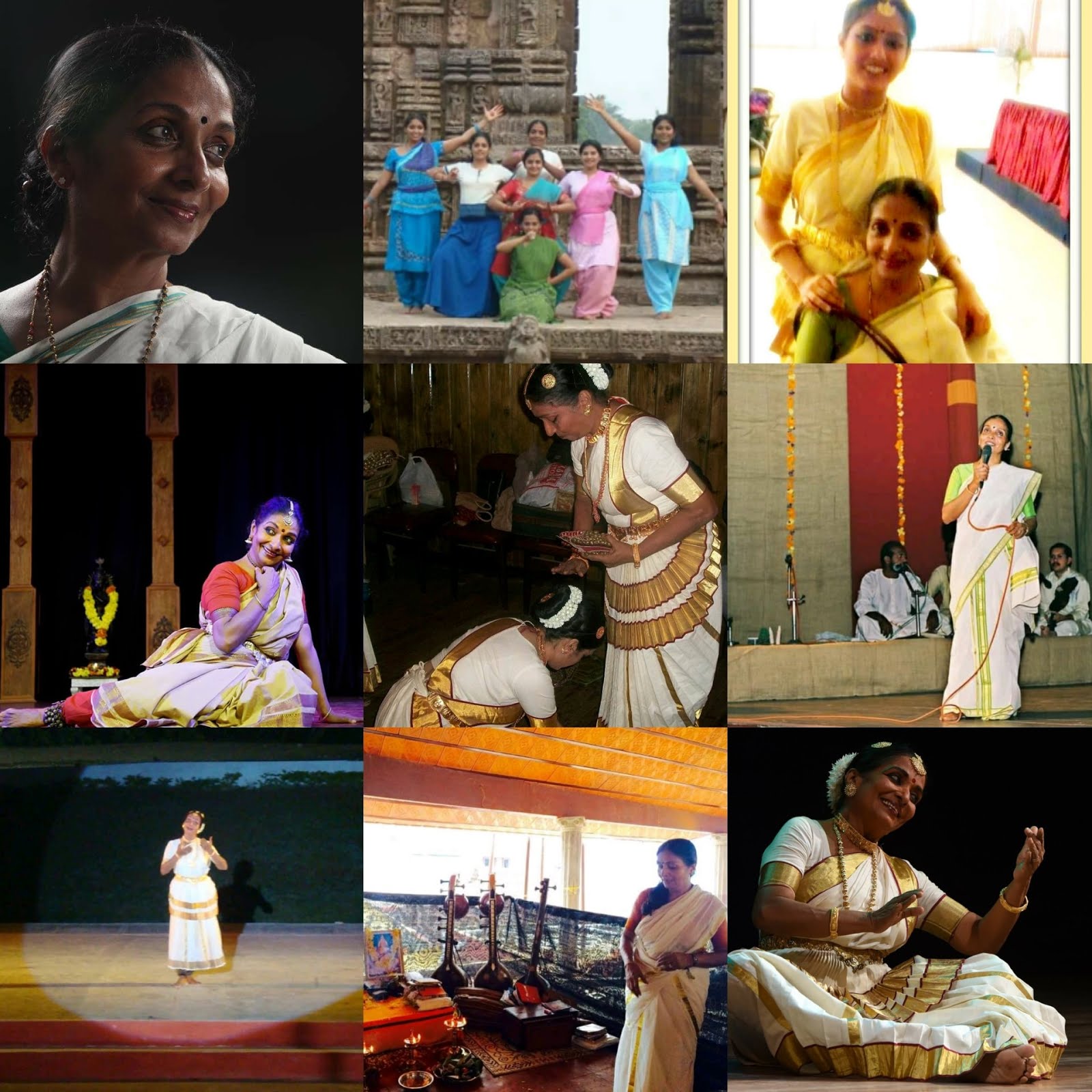 My first ever performance at the age of 7 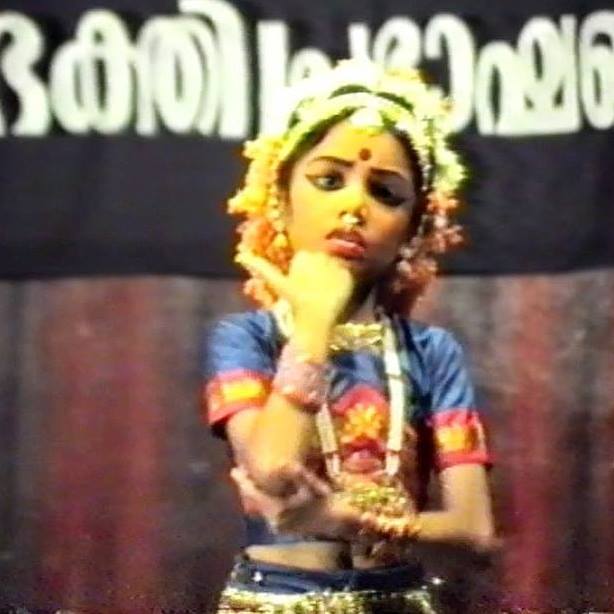 With whom I spent 2 glorious years

SASTRA University - We all are finally Master of Fine Arts -Bharatanatyam 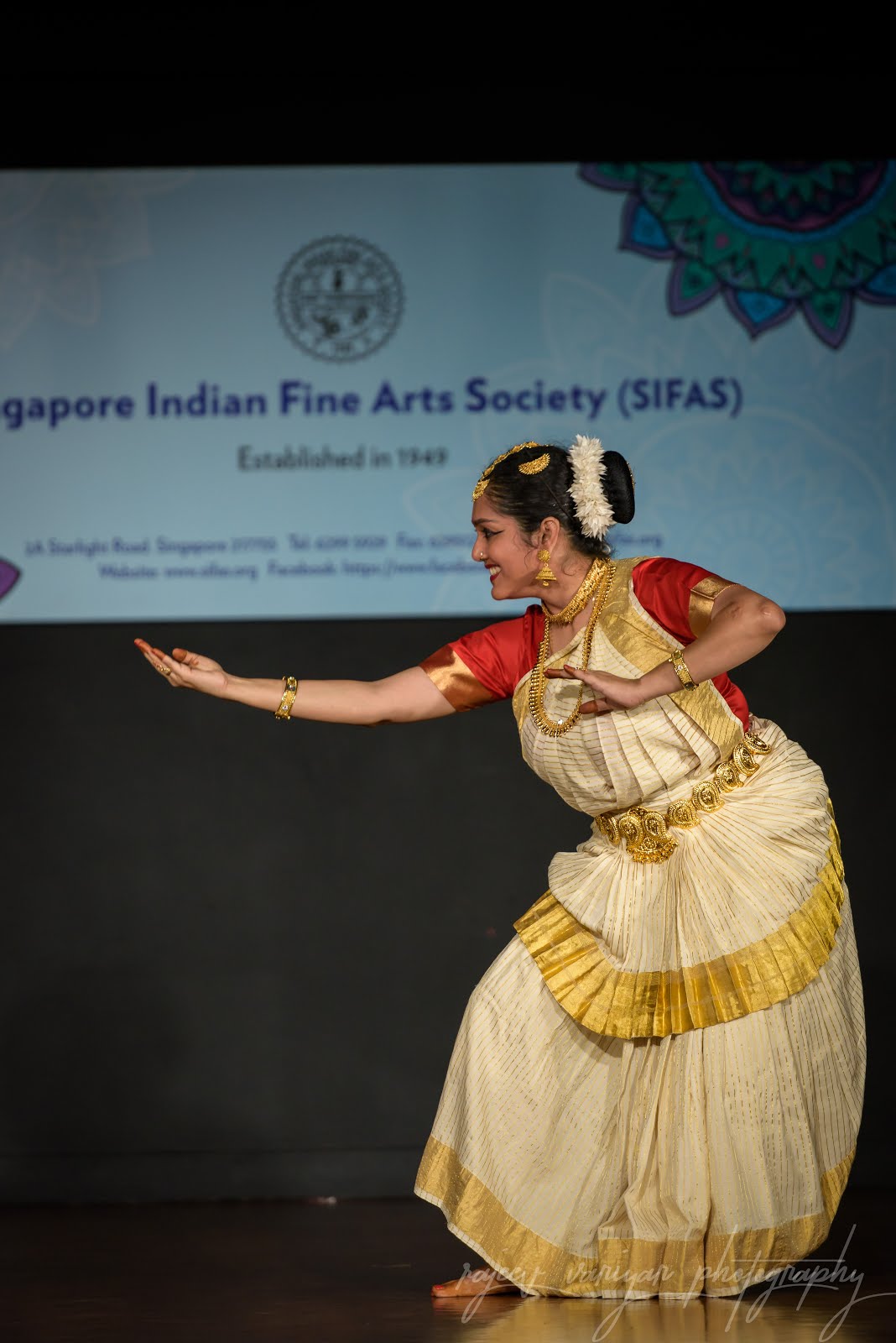 When we went to Konark 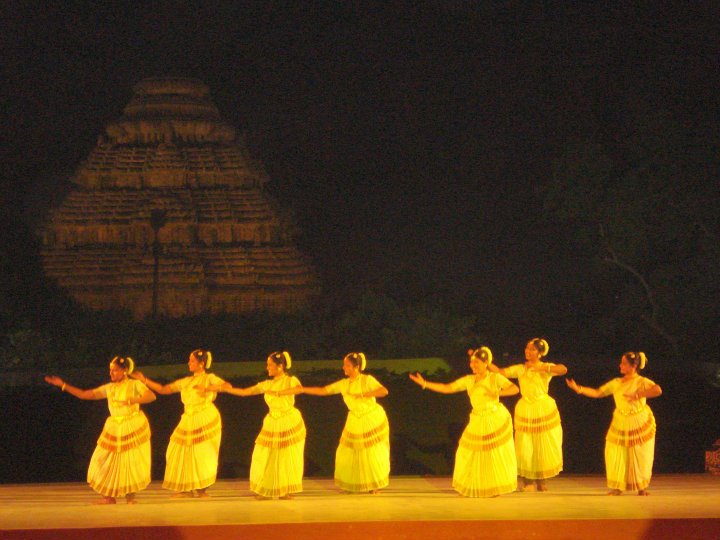 My Soulmates from MFA

These girls made it so easy for me... who loves dance as much as I do ( L to R - Sashikala, Haritha(me), Sangeeta, Pavitra

With my beautiful students in Singapore (L to R) - Me, Radha, Sreekala, Nithya. Uma, Malar Selvi